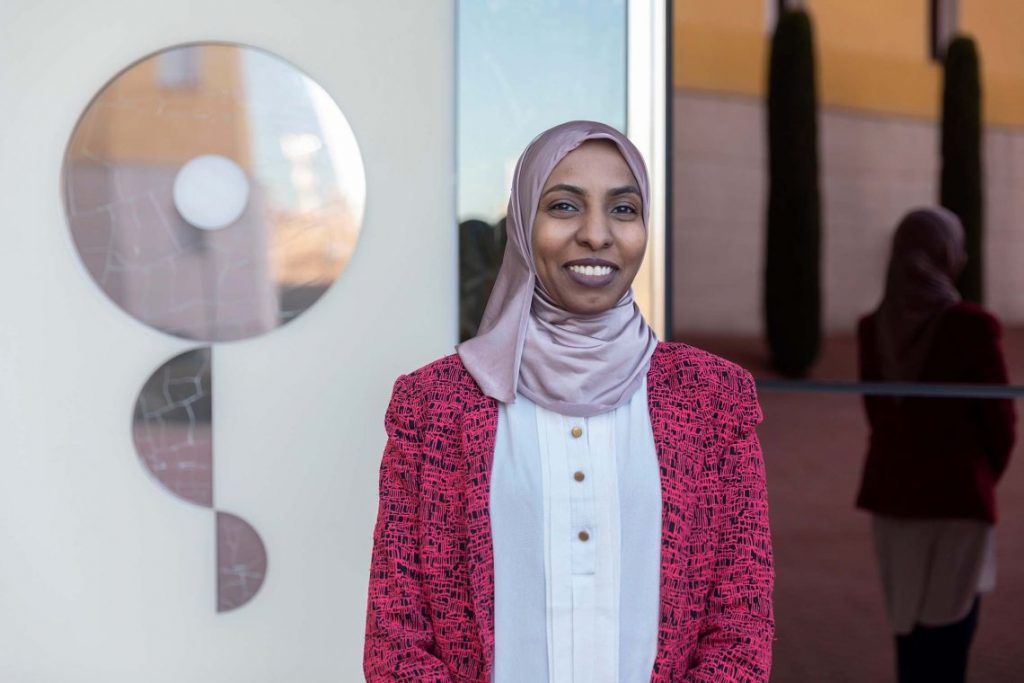 “It will be the most important experience of my life, I am now part of CNIO,” says Sudanese scientist Ashwag Mukhtar, assistant professor with the Department of Histopathology and Cytology at the University of Alneelain (Khartoum), referring to her time at the National Cancer Research Centre (CNIO), where she has been a visiting researcher linked to the Genetic and Molecular Epidemiology Group of this centre since last December.

Ashwag Mohammed Mukhtar is one of the African scientists selected by Fundación Mujeres por África to take part in its Ellas Investigan programme,  which promotes stays in Spain for senior African women researchers  from affiliated scientific institutes. The stays are for six months and allow these researchers to carry out, in collaboration with these institutes, projects previously selected by the programme’s Scientific Committee. In this case, funding was provided by Exolum.

The Sudanese scientist aims to compare bladder cancer in Spain and North African countries. She will compare and contrast the environmental factors causing this cancer and genetic diversities in order to provide important findings and data regarding this type of cancer and its treatments.

Holder of a PhD from the University of Alneelain, Ashwag Mohammed Mukhtar explains what her work will entail during her time in Spain: “On the one hand, I am conducting a meta-analysis, focusing on reanalysing the treatment of bladder cancer, genetic mutation, and mortality, and comparing it with data from the Spanish Bladder Cancer Foundation. On the other hand, I intend to determine the expression of certain genes that can predict the type of chemotherapy. We are doing this on Sudanese tissue samples and comparing our findings with Spanish tissue samples.”

As well as science, her other passions are music, meditation, and nature walks, as she explains in this video. In it, she gives recommendations about the Sudanese music she likes most, including the band AGD Aljalad. “Having the opportunity to work in another country is a very enriching experience, both professionally and personally,” says the scientist.

Ellas Investigan (Women Researching) is the most important programme promoted by Fundación Mujeres por África in the scientific field and has achieved spectacular growth. Since it was launched in 2014 with five associated research centres, it has grown to more than 20 affiliated centres and has launched seven editions.

The centres brought into this programme in the last edition are the Barcelona Institute of Material Science (ICMAB); IIS Biodonostia; and INCLIVA, Research Institute of the Clinical Hospital in Valencia. The company Abertis has also been brought on board as a sponsor, which will finance the chosen researcher’s stay at the National Biotechnology Centre on Biodiversity Issues. So far more than a hundred African women scientists have been involved in Ellas Investigan.

CNIO is a Spanish institution dedicated to the research, diagnosis, and treatment of cancer. CNIO has obtained accreditation as a Severo Ochoa Centre of Excellence for the third time in a row. It is ranked seventh among the world’s best cancer research centres (according to the Scimago report; Nature Index) and has been named Europe’s leading cancer research centre.

More than 450 scientists work at CNIO to transfer their results quickly and efficiently to Spain’s National Health System and the pharmaceutical and biotechnology market. In recent years, the strand of research devoted to metastasis – responsible for 90% of cancer deaths worldwide – has been strengthened with the incorporation of several fully dedicated research groups. Interdisciplinarity has also been boosted by recruiting computer experts to gain a more in-depth view of the complexity of cancer and to propose new therapeutic hypotheses.

One of the goals at CNIO is to bring science closer to society through initiatives such as CNIO Arte, a project that brings together scientists and artists to create new works of art around scientific research, and  CNIO Friends, a philanthropic platform through which any person, company or association can support cancer research carried out at the Centre, and through which a CNIO Friends International Contracts Programme has been launched to attract research talent.

Source: The Sudanese scientist Ashwag Mukhtar is carrying out a meta-analysis at CNIO on bladder cancer in Spain and North African countries  – CNIO